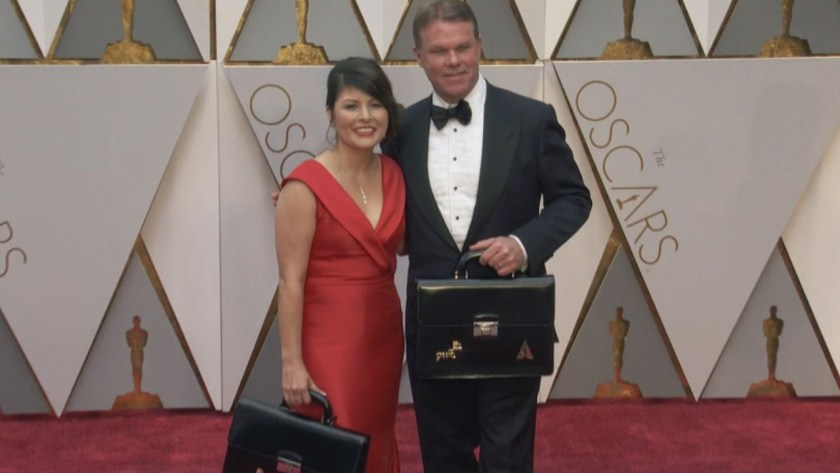 And the Oscar goes to…

We live in Trumpian times. When his wife plagiarised swathes of Michelle Obama’s speech for her own use at the Republican National Convention in July 2016, Donald Trump declared Melania’s scandalous contribution a great success, because ‘all press is good press’.

It was perhaps inevitable that the first Oscars in the 45th president’s reign would culminate in an ungodly show. Trump has energetically convulsed the world, and daily lures it to chaos. His great contribution to civilised society is to encourage its drift towards incivility, and to pioneer in uncovering rabbit holes of vacuous distraction on the way.

Pandemonium is the opium of the people.

By these standards, last Sunday’s Oscars was a rather mild piece of fumbling incompetence. It was simply, as the Americans like to term it, ‘a snafu’ – a military acronym for ‘situation normal: all fucked up’. Quite.

I have read several tick-tock explanations of what happened during Warren Beatty’s and Faye Dunaway’s announcement of the Oscar winner for Best Picture.

It all comes down to the banality of errors. The accountant bloke put the wrong envelope in Beatty’s hands (Best Actress, not Best Picture); the gold-on-red printing on the envelope was unnoticed, perhaps because it was difficult to decipher; Beatty suspected something was wrong on opening the card inside, but he fumbled under the klieg lights; Dunaway was in scolding humour, and simply read the first movie title she saw printed on the erroneous card: La La Land.

Yes. The movie whose end is an intricate weaving together of what might have been had the lead characters made other choices, became the subject of its own dénouement. La La Land was declared Best Picture for all of two and a half minutes, until the accountant bloke finally got his act together to come on stage and slowly, confusingly unfuck the fuck up.

I cannot tell you how gripping all of this is, to see playing out in real time. In the midst of consternation, something real and recognisable comes to the surface. Underneath all the artifice of celebrity and the power that global storytellers convey on stage, there lay a bunch of slack-jawed human beings wondering what to do next.

There’s a cute photo of Ryan Gosling standing in the middle of the melée, smirking to himself. Nice one Ryan.

And so to the heart of the issue. It transpires that the accountant bloke is a senior PwC partner named Brian Cullinan who was tweeting random celeb photos a couple of minutes after handing the wrong envelope to Beatty, and fully two minutes before Dunaway announced the wrong Best Picture winner to the world.

Hubris. That inelegant space where you think the work is done and the battle is won, only to see it all unravel before your very eyes.

It gets worse for Cullinan. When La La Land was announced and he knew it to be wrong (he and his PwC partner Martha Ruiz are the only people with this fore knowledge), he lacked the clarity to go directly out on stage and correct his mistake. And all the time, La La Land acceptance speeches were being made.

I do not blame a man for making a simple mistake. I do not even try to make of him a celebrity-focused sycophant. But I do begin to judge him based on how he acts when a mistake is discovered.

It is honourable, professional and necessary to make things good when an error is discovered, and make it speedy. Such a skill is at the heart of what distinguishes the world’s great accountancy brands.

It appears PwC was poorly served by a senior partner who was ill-prepared to cope with unexpected events as they unfolded, having been ill-disposed to recheck that his duties were carried out correctly in the first place.

What happened next was a mesmerising butterfly effect. One simple error led to a set of unexpected consequences. La La Land – the biggest winner of the night – was framed as a loser; most other victories of the night were drowned out by one extraordinary happening; the movie Moonlight – the actual winner – was robbed of its moment of glory though it may well still benefit from being caught up in such a global story with press staying power. And the most memorable man of the evening is a cockeyed, fumbling anti-hero from PwC named Brian Cullinan.

I am sure many parties are determined to draw lessons and learnings from the Oscars snafu.

If I’m PwC, I want to understand how we lost sight of our obligation to get something simple, 100% right.

If I’m the Academy of Motion Picture Arts and Sciences, I am obsessed in understanding how we institute belt and braces redundancies throughout the night, which specifically anticipate human error in order to correct for it.

But if I am Donald Trump, I am inclined to laugh in the face of it all, spin it for my own purposes, and then walk away from the absorbing, vacuous, delicious chaos.