The logo. That simple, eloquent and essential visual statement of who you are. What you stand for. How you’re different, and relevant.

As Democratic clambering gathers heat in the USA with today’s entry of Joe Biden, it’s interesting to see how the leading candidates have chosen to present themselves.

For fun, I’ll look at their candidacy only through the prism of their logos. As if they were an unknown product, sitting on a political shelf.

What do these candidates have to say, based on that first visual introduction? What is their strategic intent? Design is the harbinger of destiny. Forget the pundits! Decode design, and you’ll call the winner.

So, with the proviso that this is for fun and not some serious Boston Consulting study, buckle up and let’s have a look and some Lefty Logos…

First there’s Elizabeth. She was the first biggie to announce. Check out her logo. The choices she has made are instructive. She is clearly not running as ‘a woman’. Indeed, her first name is absent from her identity. This is hardly because she’s super-famous. The word Warren does not ineluctably mean ‘Elizabeth’. I think of the Warren Report (a great read, although some think it fiction); I think of rabbits; I think of a teacher one of my sisters once had…

But Elizabeth Warren is running on Warren-ness. It is a distancing from female-ness. She will be the candidate of competence, not gender. She will be a candidate of facts and policy. Watch her skirt softness and evade overt femininity. Within Warren’s logo is a certain assumption: voters want strength, not feeling. Strength is needed to topple Trump. Of course, she knows they truly want both – but they need to feel the brawn before they can fall in love.

As if to emphasise that she’s all business, Elizabeth’s logo is underlined. It’s not just Warren, it’s Warren. It’s not just Warren it’s WARREN. Note the sober colours. She has walked far from hopey changey star-spangled blues and reds of Obama Americana. Elizabeth comes to us in deepened navy, with military sobriety. Democrats find themselves in a state of crisis – of identity, of integrity. It is time to solve this with persistence, assuredness, confidence. She is no frills, all force.

But perhaps she has over diagnosed the problem? Voters are in need of authenticity as well as performance; kindness as well as competence. Ms. Warren’s challenge will be to find this balance. Her logo has not done so. It is an uneven first move. 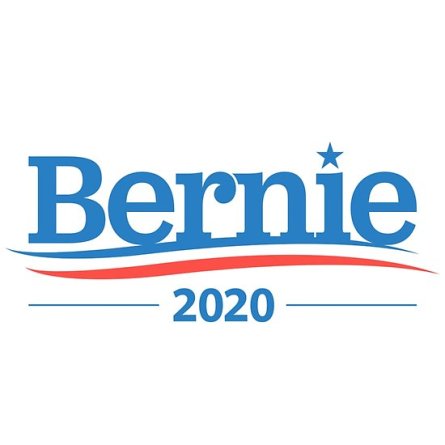 Bernie Sanders is the world’s best uncle. As his nieces and nephews grow, they will hear uncle Bernie spit venom at injustice, and will witness moments where ideals are articulated and wrongs righted. Bernie will hardly ever remember their birthdays, and will need a prompt to put some crappy wrapping paper on hastily-arranged Christmas present. But the kids will thrive in the presence of his fire and love and warmth. Uncle Bernie is crazy, ungovernable, irreplaceable.

But can he govern?

2020 is Sanders’ second bid for the presidency. Looking at his logo is all we need to understand his trajectory.

It’s the same damned logo as 2016! In Bernie’s heart, little has changed except that Hillary and her damned emails are no more. He is, judging by his logo, about to prosecute the same campaign as last time, with the additional chorus of ‘I told you so’.

This places Uncle Sanders in his least attractive light. The world has turned these last four years; the mood of Democrats altered. Bernie thinks his logo should define him, and he’s not for changing.

But this misses a key opportunity in visual identity. A presidential logo lies at the intersection of politician and moment. His job is to frame why Sanders makes sense in 2020. He must sing a new tune, one to rattle Trump. Unfortunately, he has chosen to re-release his first album.

Within the last 24 hours, Joe Biden has arrived to the platform. Or ‘Sleepy Joe’ as Trump immediately name-calls him. (‘Sleepy’ meaning old and stupid, that is). Note how quick the President moves to frame those he feels most threatened by. I am frustrated by how often the Trumpian discourse is about his apparent madness, and not his deft method.

But what of Biden’s logo?

Well, it’s all very serious. He runs on his family name, the E being transformed into a wafting American flag. (Social media has him rocking up as the more informal Joe). It feels safe. Traditional. Almost formulaic. Or, to be fair to the former Vice President, perhaps simply classic with a little nod to Obamian flair. Rather than refer to 2020 on his logo (it is, after all, contextually obvious) his logo makes bold reference to ‘President’.

Mmmm. Note that. It implies that Joe’s strategy people believe their candidate’s weakest point is his believability in the top job. That he’s perhaps a little lightweight. It is almost as if Trump and Team Biden have read the same research debrief. Biden’s ultimate challenge will be to rise beyond being popular to become credible. His logo suggests he’ll grind it out. Innovation will not get him to the face-off with Trump, but grit just might.

Then there’s a couple of the new kids on the political block. 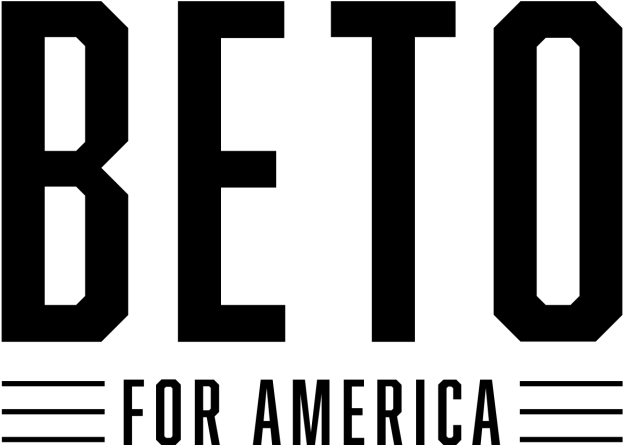 Let’s look at Beto O’Rourke, out of Texas. I know little enough about him. Which I assume reflects the electorate, although primary voters will be slightly more attuned given they seek a Saviour. But let’s be clear, many voters still know The Beverly Hillbillies better than they do Beto.

The unknown man is running on four letters. BETO. The font is elegant (almost elitist) and stretched, like his 1.94m physique. His framing for his candidacy? ‘For America’.

Beto is for America.

What a shame. It seems to me that the Lone Star Man does not yet know what he stands for, only that he’s standing.

It’s not good enough to start as an unknown and offer so bland a fare. Mr O’Rourke has got some serious strategic thinking to do. Thinking that moves beyond his own stretched ambition. I do not know him yet, but my opening position is that he needs to stop believing his own PR and figure out his relevance. Fast.

And then there’s Pete Buttigieg, a man distinguished by his orientation (gay), his ability to be noticed (decided) and his confounding name (unpronounceable). Pete’s logo is decidedly not towing the line, drawing inspiration from American life (and, I suspect, his own life story) and not American dreams as he seeks to lay out his stall. His logo uses 2020 in the only interesting way possible – borrowing the codes of ophthalmology and a 20/20 clarity of vision. In its rustic colour palette and font choice, divorced from Americana’s shiny reds and blues (mustard brings the informality of American football, with its implied promise of teamwork), Pete’s logo promises a fresh approach and one worthy of attention. Of course, it is for Mister Unpronounceable to fill that void. A candidate who says yes to such a logo, and to the design brief that lies behind it, is one bent with purpose.Let’s keep our clear-visioned eyes on Pete.

Logos do not determine success, and voters do not vote for designs. But they do offer an insight into the projected intent of candidates. Within this lies a hint at their strategic readiness. More than any speech, logos lay out a candidate’s stall.

By this simple reckoning, and in a political context that has Democratic voters demanding resolve and fresh purpose, where are we?

Buttigieg is out of the gates first. Followed closely by Warren. Bernie is backfiring. Beto is banjaxed. And Biden is the dozing bear who may yet awaken and begin to roar.