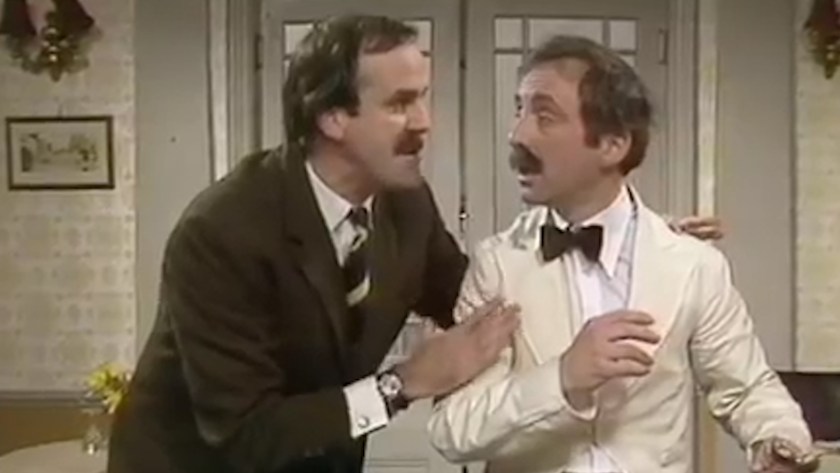 The death of actor Andrew Sachs this week will be particularly resonant to anyone who grew up in the pre-cable age, when British comedy ruled the waves.

Manuel, one of the four iconic and beloved characters in Fawlty Towers, was the hapless Spanish waiter whose confused English belied a pure heart, considerable wit and a towering human grace. The cocktail made him not just hilariously funny, but somehow poignant too.

The underlying joke that made Manuel’s character so intrinsic to Fawlty Towers was not that he appeared dumb, but rather that his employer, Basil, was cheap. Manuel was hired off the boat because Mr Fawlty was too tight to pay for someone who actually could speak English.

‘He’s from Barcelona’ was the perennial explanation from the condescending, myopic Basil and Sybil, and all to great laughter.

Fawlty Towers was a farce of divine proportion; a piece of writing so perfectly attuned that the change of any single word would lead to diminishment. The four farceurs were delicious not just because they made us belly laugh, but because a truth lay underneath the exaggeration.

It was comedy from another time, and Sachs’ death is a cause of sadness. And besides looking at re-runs of Fawlty Towers (I saw The Anniversary on Netflix last night, which is perhaps my second favourite of the 12 episodes), I began to think also about how Barcelona has changed in the last 40 years.

Fawlty Towers first aired in September 1975. Franco died in November of the same year. Manuel’s character emerged from a poor and despotic Spain, seen through the gauze of British cliché. It was normal, though not necessarily smart, to see Spain as a conglomeration of incompetents, embroiled in a failing system. The country, in the 1970s, was targeted as a high-rise sun destination, attracting tourism which offered little interest in Spain’s native culture. Indeed, I do not believe that the word ‘Catalonia’ was uttered once in Fawlty Towers. And Manuel certainly never spoke Catalan. That would ruin the fun, and the point.

And then time moved on. They buried Franco. They brought back the King.

And then Barcelona bid for the summer Olympics, and won. In 1992, the city itself was the undisputed medal winner, par excellence.

In one sweep of two weeks, it set aside the pall of fascism, the dominance of Madrid, the uniformity of Spain, and declared Barcelona a unique Iberian idea with its own style and message. Freddie Mercury and Montserrat Caballé helped out, with their explosive duet which channeled the drama, camp welcome and beauty of this city by the sea. Barcelona was reborn. To this day, I cannot think of the capital of Catalunya without bursting into song: ‘Barceloooooona!’

And then time moved on again.

Just last week, I caught the tail end of an AirBnB story which struck me as a quiet milestone. The authorities in Barcelona are fining the internet accommodation giant for offering too many of the city’s dwellings on short rentals at too high a price. They claim the result is the ‘over-tourist-ifacation’ of their city, and an effective tax on the price of accommodation for the city’s natives. The campaign by residents to drive drunken tourism from the city limits (‘Fora tourisme de borratxera!’) has found its enemy.

Europe’s poster girl of all-embracing tourism, which began as Franco’s life ebbed away, and flowered with the help of 1990s Olympians, has reached another point of reckoning and possible reinvention.

Andrew Sachs, himself a child refugee from Hitler’s Berlin, was well placed to appreciate the sweep of such history and change. And to appreciate the power of comedy to capture, for the ages, a truth which might otherwise be lost among the ruins of progress.