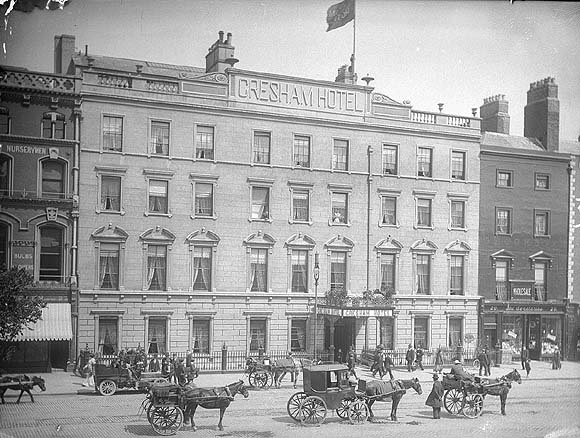 It Would Make You Think

In the glare of an August afternoon, I walked among headstones in Mount Jerome. There was a pleasant stillness about the place, and I had time to kill before I would sing. So I browsed the plots, a pastime which brings one readily to a meditative state.

I passed a family vault to my right which was both wealthy and the worse for wear. It had a mottled, dulled look, signifying generations of lichen and grime, piled high on each other. The name embossed in its parched wooden door was a Dublin family long-associated with grandeur though the last fifty years had brought about decline. The vault, mute and eloquent, retold the family tale.

I paused on a bend in the pathway to inspect a gravestone, this time of more recent vintage, from the 1980s. A woman named Yolanda was buried here first. She had an Italian family name, so packed with vowels that it would barely fit on the polished marble. She had passed away at 47, a beloved wife and mother. There was something in the inscription which made me think that Yolanda was deeply loved, and that her death came as a true catastrophe. Because gravestones announce the future as well as the past, I could see that her husband would die some few years later; young also, at the age of 60.

I was thinking of their Irish / Italian love affair, imagining how it might have begun, and how quickly each protagonist was ripped from the stage, when I was suddenly interrupted.

In absolute silence, a man had arrived up and stood right there, behind me.

His interruption did not consist of the usual greeting or nod. Rather, he launched directly into conversation, as if continuing a train of thought already in the air.

‘So I was thinking to myself, and the thought won’t leave me… what would happen if you calculated all the sorrow and measured all the tears shed in this graveyard? I mean, how much has there been since it opened its gates? Doesn’t it make you think?’.

He was a man perhaps five years older than me. He held a walking stick, though I could not decide if it was due to an acute injury, or something long-term.

He stared at me intensely, awaiting a reply. I took my time.

‘I remember reading that the cemetery in Glasnevin has more than a million and a half buried in it’, I countered. ‘Which means it has more people than the whole city of Dublin’.

‘Is that so?’, he replied, pondering the enormity of the sorrow and tears that this would imply.

‘I’d never usually come to a place like this. My wife is over there looking for her great grandfather. I wouldn’t. But it would make you think’.

That phrase again. The heat of the sun seemed to envelop us, emanating from the path and headstones as well as the sky. His eyes cast downwards and caught sight of my music folder.

He now took his turn to create silence. Lips pursed, he surveyed the cemetery, casting his eyes back along the path I had come.

‘Those Greshams’, he said. ‘Such grand aristocrats but they’re just as dead as the others. And did you see the grave of the chap who was murdered in the Regency Hotel a while back?’ I had not. ‘Loads of flowers and poems and sayings. But he’s just as dead too’.

We stood in comfortable silence, looking around us. We were each in the same mood, and had exchanged enough.

‘Nice talking’ he said. I nodded, and wanted to shake his hand. But my arms, unaccountably, stayed motionless by my side and the moment passed.

As we walked on, in opposite directions, I felt a need to express my thanks. I called back to him, smiling. ‘I’ll be thinking about all this when I sing today!’

‘Yes’, he replied, lifting his walking stick in acknowledgment. ‘It would really make you think’.