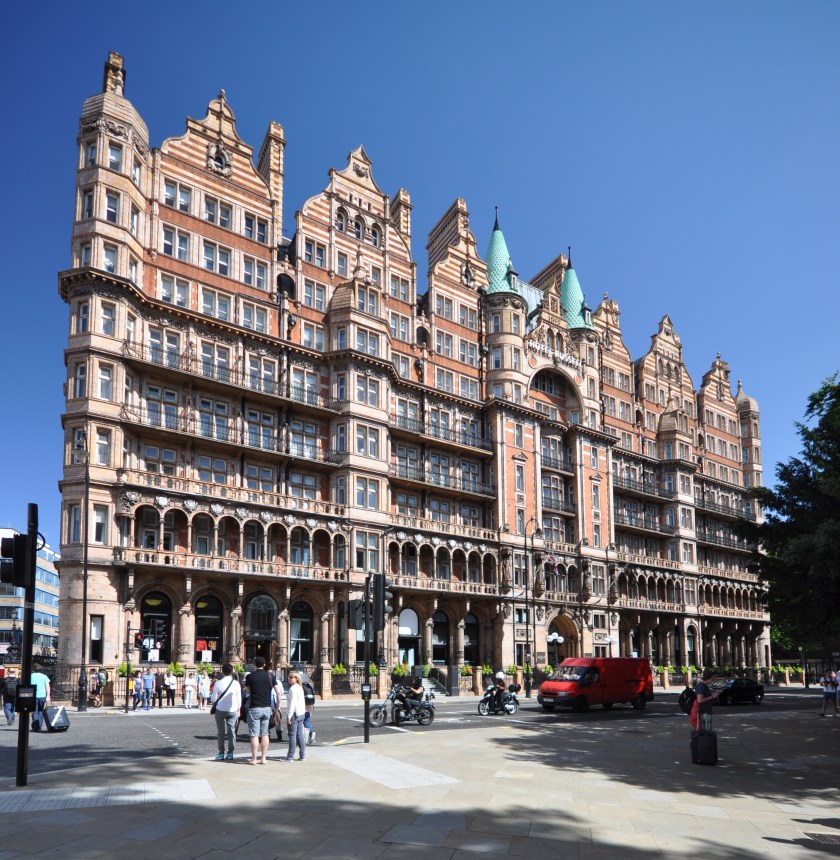 London, In The Heart Of June

I am sitting in a cafe that sits in a Garden Square. It is run by an Italian famiglia ‘since 1981’. That is their claim, though I have cause to doubt it.

It is a cafe suffused with chaotic incompetence, which strikes me as vaguely charming. If you want utilitarian coffee in London you go to Costa or Nèro. If you want to explore where caffeine intersects with humanity, get thee hither, to the city grass in the garden of Russell Square.

The queueing system here is a homage to Ceausescu. Two and a half men do what one should properly do. I order a hot breakfast from the kitchen which is assigned a number, but I am given nothing to announce it, nor am I asked where I will sit.

The result is a hapless man laden with plates, parading through the cafe’s unwieldy space shouting numbers in an accented, insistent-yet-hopeful voice.

It is a bright morning, one day off the longest day of the year, and I am serene even though the numbers being shouted suggest my breakfast is achingly distant.

Oscar Wilde once lovingly dedicated a book of poetry to Bosie, describing the date of dedication as being ‘in the heart of June’. For Wilde, the month made his sentiments more meaningful.

It is a detail that has remained with me. All love, all obsessions, all awakenings are more perfumed in these days; these sacred days at the centre of summer.

There is another reason for my serenity.

I am in Bloomsbury, returned to the location of my first job abroad as a student.

I came in search of summer employment, escaping the mid-80s malaise of Dirty Dublin. It was a time of shrunken confidence, when ‘made in Ireland’ seemed like a quality curse. Unbeknown to ourselves, a collective awakening to the perils of authoritarian leadership – be it overbearing TV anchors, or omnipotent church leaders, or a-hole politicians who spoke of husbandry and practiced gluttony – was arising from our depths. Accelerated by scandal, there would come an outpouring of outrage, and a cultural revolution so profound that I would, by my forties, be proudly part of a new Irish society.

My summer journey in 1985, with my college friend and co-conspirator Eamonn, began by mailboat and train, via a pitstop in a Kilburn hostel where we shared with Danny from Donegal who vomited nightly into our room’s only sink after yet another evening of beer, and ended with us renting a room on Warrington Crescent, in Maida Vale.

We did this because we had found jobs as Room Service waiters at the Hotel Russell, located a few tube stops away in Russell Square.

I am staring at that beautiful hotel building right now, gilded in the morning sun. Some years back it was sold by Trusthouse Forte to another hotel group, and then another. The latter is a rather swish outfit called Kimpton which has recently put down luxury wool carpets where stale threads once lay.

The building’s facade is a florid, wedding-cake affair, unperturbed by notions of humility. Its architect was a Mr Charles Fitzroy Doll, famous in the Victorian and Edwardian periods for terracotta brickwork in the ‘thé au lait’ colours of exuberant luxury. The hotel’s main dining room is almost Vaudeville in its vision of splendour. Indeed, so proud was Fitzroy Doll of it that he borrowed his own design in its entirety, replicating it on the RMS Titanic.

Together, they were twin dining rooms for the ages.

By the mid ’80s the hotel had descended to three-star package tourism and its resplendent dining room a place for clattering trays. Quite the decline, until you consider the chilly fate of its Atlantic sister.

My eyes trace the building, story by story, room by room. I had been on every one, and in every one. Delivering trays. Collecting trays. Reading tourists’ postcards which lay in their rooms suspended, awaiting stamps. Laughing with Eamonn at Floridians’ cheesy sentiments of London, all recounted in unmistakable cursive. To this day I question American originality on the asinine basis that everyone writes the goddamn same.

I also recall the work.

Being diligent in our 6.30am starts. Joyous in our 2.30pm release. It was then that I began learning the meaning of service and became partial to the weight and texture of the British pound coin. Every tip is a triumph when you’re young.

Throughout that summer, I filed away the experience. Details crawled into my back-room memory, placed by a methodical record-keeper who took no notes:

The smell of fresh brioches. The beaded elegance of Caribbean women’s hair. The soft feel of my universal hotel key knocking on wood. The jaunty face of Alison, an English waitress who every day stole one piece of hotel tableware into her satchel to furnish her love-nest with Sam. How far removed my life seemed from theirs, rattling in the cage my culture had gifted me.

Our boss was Eithne, and I presumed we got the job only because we too were Irish. It did not occur to me that we might be good. That we might do the job well, with politeness and charm. Maybe even better than she. Eamonn by the end of summer was done with her. In the heat of argument he called her a cunt.

It would take me twenty years to understand why he needed to stand up for himself, more than he needed to keep the peace.

Russell Square Garden has a brightness now that was fully absent in the 1980s, when it surely had no cafe.

Britain, of course, was then engaged in Thatcherite wrestling, though Londoners seemed often to rise above the fray. That the Garden Square was a notorious hangout for cruising gay men after dark felt like a working solution typical of the city’s libertine instincts. There are few squinting windows in a place so wholly focused on growing.

I find myself reflective as I eat my breakfast. Egg, beans, brown toast already buttered, all a little off being hot.

In some ways I feel so far away from the teenager I was then, in 1985. I am less eager to please. Wilful in my convictions. More circumspect in my joy.

Am I the same person, I wonder?

Pausing in the June heat, I search for the answer. A single thought finally settles, and its momentary clarity prompts a gentle inner smile.

Although the interiors have been carefully repurposed, my essential architecture remains unchanged.