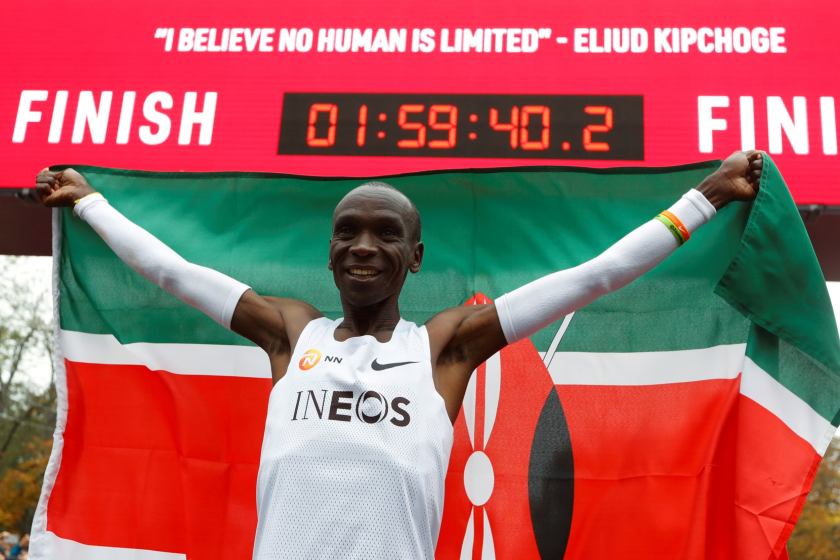 The story of the first marathon is one of myth, weaving historical fact and human passion in a rich and varied yarn.

The account that comes most clearly to us is that of a messenger hero, Pheidippides, who ran from Marathon to Athens in 490BC to bring news of victory over Persian forces. Having accomplished his task, he promptly expired at the city’s walls through a convulsion of joy.

This marathon story has stuck chiefly because it was made popular in verse by the poet Robert Browning. But we know how rhymers like to press laurels on the curls of facts.

In recounting the story of the marathon, Herodotus and Plutarch contest both the core facts (was the actual route not Sparta to Athens?) and the fine detail (did the warrior hero not die of fetid wounds, not joy?). But to get caught in the weeds of fact is to miss the marathon’s meaning.

It is not the story of how a particular battle’s outcome was communicated; it is the story of supreme and enduring human effort, extraordinarily made by an ordinary person. Myths are the truths that move us most, it would seem. All is fair in love and lore.

That the marathon had power to beguile was clear, even to those organising the first Olympiad of the modern era in 1896, in Athens. Those turn of the century Greeks were bent on assuring that a Greek national would actually win the Game’s most important race.

Host athletes of the time were offered rather random supplementary prizes by patriotic Athenians, beyond the normal medal.

If the winner were Greek…. (1) a tailor promised him a free suit of clothes; (2) a barber promised to shave him for life; (3) a volunteer offered to do his washing and ironing ad infinitum; (4) and a lady offered to marry him.

It appears that these entreaties did the trick. In the Olympics of 1896, Greek athletes claimed the marathon’s first, second and third prizes.

There is no independent confirmation regarding whose laundry got done, and for how long.

The marathon, all 26.2 miles of it, has a hold on our culture perhaps for quite straightforward reason: as a race, it is a metaphor for the challenges we face in life. It is clear demonstration of a home truth – you get out what you put in.

Kenyan Eliud Kipchoge’s supreme achievement this weekend – to run a marathon in under two hours for the first time in human history – is a compelling triumph of athleticism and a bolt of inspiration for each of us who cares to catch its energy.

What a singular, majestic achievement.

So often, noisy jostlers nibble at the limelight, paw the garlands, grab the prize.

Such things would be unseemly. Because the triumph here is one of spirit, commitment and the strategic focus of one man with a simple, single goal.

In a recent TV interview, Eliud Kipchoge’s trainer, Patrick Sang, explains what made his protégé different. In short, it comes down to the athlete’s internally-focused purpose. Kipchoge was not running to win prizes, nor to impress, nor to rate himself versus others. He was running marathons to break that discipline’s most significant barrier. Under two hours.

Kipchoge knew his quest was audacious. Some time before the record attempt in Vienna, he likened it to the first man walking on the moon.

I hesitated on hearing him say that. After all, the moon landing was about mankind reaching an astronomical body beyond the earth – a natural phenomenon placed there by Mother Nature. Breaking the two-hour marathon barrier seemed different to me, on first glance. For example, the 26.2 miles is a happenstance of legend; and the 120 minute barrier is an accident of how we measure time. In summary, the marathon is a relative human creation; the moon is an objective, natural one.

But then I thought some more. And I saw more clearly what Kipchoge was saying. Seeking to land on the moon and to run a marathon under two hours have both achieved mythic status in human culture. Each has been a beacon of audacity, and about conquering something against impossible odds.

In parlaying myth into reality, our collective human confidence expands.

Indeed, Kipchoge’s message is clear. ‘No human is limited’ is his constant refrain during interviews.

It is a powerful moment on which to reflect. His wife and kids rejoice. Kenya is deeply proud. Every person can draw inspiration from his singular personal achievement which doubles as a beautiful act of leadership.

Kipchoge may now take some gentle rest on his laurels. Given the joyous embrace by his wife at the finishing line, I suspect he is in no need of a lady to marry. However, I demand that he be exquisitely shaved, suited, laundered and ironed for all time. Such things befit the greatest Marathon Man since Pheidippides.