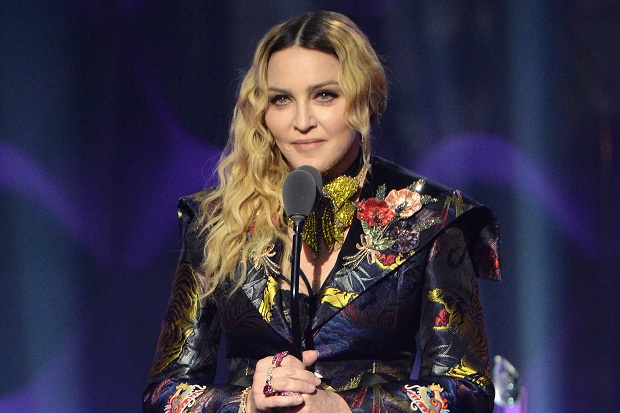 ‘I stand before you as a doormat. A female in the music industry.’

The opening words of Madonna’s acceptance speech as Billboard’s Woman of the Year 2016 were her own special brand of feisty. She had, after all, just quipped that the mic-stand in front of her was reassuring, as she liked to have something ‘hard between my legs’.

The audience reaction seemed muted. Like they were over her infantilised, sexualised antics. But the woman in front of them had only just started.

I have grown up with Madonna. Not in that cosy, ‘she’s my muse’ sense. Rather, her life as a best selling artist was coterminous with mine as a young man. La Isla Bonita was the standout track of my final college summer, when I battled through a thesis on telemarketing and faced into likely unemployment in the depressed economy of late 1980s Ireland.

More than a decade later, and I recall bringing Ray of Light as a gift to friends, and rhapsodising about its qualities, and the magical reinventing woman behind it. Indeed, I still love Beautiful Stranger – and think of my Swiss compadres any time I hear its rattling opening bars and urgent opening question: haven’t we met?

And during the intervening, heady 1990s, as I grew fully into myself, I saw how powerful a force Madonna was among my gay community. She had a mix of bravura anarchy which was exciting. Somehow, it was exactly how many of us felt. We, who had been systematically marginalised and criminalised by our own society, to which we nonetheless systematically paid tax and contributed our talents and caring.

My friend, Eamonn, had a glamorous and very nice boyfriend called Richard back then. Richard celebrated his 21st by blowing out candles on a cake with intricate hand-made icing, depicting the Erotica album cover. I still remember that cake. And I remember thinking: wow, he sure does love Madonna..!

By the time the 21st century rolled in, I had dialled out of pop music, and my connections with Madonna waned. I gravitated more to her words than her music, in so much as I gravitated to her at all. And I found her to be singularly clear-headed in interview. It was as if her full worth had been hiding in plain sight: amid the glamour, the go-go boys, the pout was a super-smart human being. Perhaps she too was growing fully into herself.

But I did not care to pull the pieces together. Madonna had become vague to me. A flash of crucifix from Like a Prayer; a recollection of her on-stage at Live Aid declaring ‘I’m not taking off shit today’, referring to scandalous nude photos; of a snippet of her fobbing off Kevin Costner with trademark arrogance on film.

Last week, the focus returned. In crafting her words, she managed to stand outside herself and knit together what life as an artist felt like, for her.

She spoke powerfully to the Billboard audience with fluency, though without oratory. It did not need it. Hers was a speech full of cathartic energy.

Madonna described how her rebel choices had been influenced by the trauma of rape and violence during her teenage years in NYC. How those nude pics were the result of needing student work, used to goad her into a shame she refused to feel. And she spoke of the misogyny, bullying and ageism she had encountered on her journey, most recently by having the impertinence to continue making music, dressing like a diva and acting like a woman proud of her sexuality and her sexual fantasies, right into her fifties.

In those brief minutes, she reconfigured the gauzy Madonna pastiche in my mind. A three-dimensional woman of great substance, strength and vulnerability stood before me. Apparition.

Sometimes, we act in ways that boldly summon the essence of who we are. In these moments, people who may have long nurtured a caring for us are moved to re-examine how they feel. It is the moment when love is in the balance.

So it is, with Madonna and me. I am fully with her. And realise I always have been. And I am left wondering how I may mark it?

I have already sent a link of her speech to my nieces. I have have already followed that by penning these words.

But what of tomorrow?