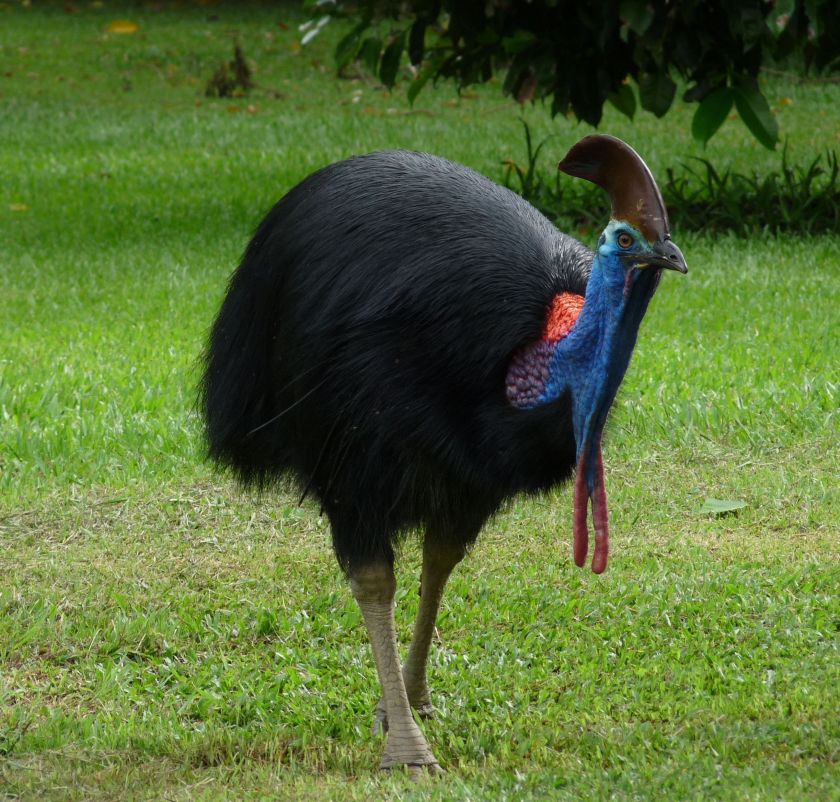 The Flight Of The Cassowary

Australia’s expansive, and famously pesky, biodiversity is, to my amateur eye, evidence that competition delivers results.

On this island continent, a great gladiatorial battle has played out over countless millennia, as each species of life attempts to adapt to this hostile environment of limited resources, a place where plenty of candidates will likely rob your lunch if you’re not looking.

Such tough problems have encouraged deeply imaginative responses by Australia’s flora and fauna: there’s the whole nifty marsupial idea; there’s the rather popular idea of venom – a copy and paste solution adopted by snakes, spiders, platypus, black beans, nightshade, the list goes on; there’s the thieving Christmas Tree which gathers its water by mugging the root systems of neighbouring plants, leaving them parch in the process.

Neighbours may be a cuddly Australian TV show, but it sure does not emanate from a land that’s particularly neighbourly.

Which reminds me. There’s also the ransacking, murderous Northern Europeans who dropped into Oz during the 18th century, and mounted a campaign of genocide on the native people living here in largely peaceful communities for nigh on 70,000 years. Other species in nature do indeed kill each other, but such acts could hardly be philosophically considered murder.

18th century man however, equipped with insight into the moral dimensions of his behaviour, might have been expected to find an imaginative means co-habitation. In the event, alas, he did not.

Imaginative biodiversity is the clarion call of delight for any child. I can plot the stages of my boyhood development by way of Australia’s fauna.

There was my koala phase (cuddles, cute and calm), my kangaroo phase (jumping around and horseplay), and there was my platypus phase (geek scientist, animated by experimentation).

There is only one amongst all of Australia’s birds and mammals that has remained a fascination right into adulthood.

You know: it could only be the cassowary.

By chance, I met an American veterinarian at the theatre in Sydney the other night. The performance we were about to see (Measure for Measure, by Shakespeare, but in Russian) was so confronting that we thought it better to talk about animals. She had spent the day at the zoo.

Now there’s a thought. Having seen no wildlife on my trip in Oz had been bugging me. And so, next morning, I took myself over the Harbour Bridge to the city zoo, to introduce myself to some cassowary.

The southern cassowary is native only to Australia, and alas is endangered. A story familiar to many species, its habitat up north is going south – part of the government’s keen desire to develop the Northern Territories and Queensland with a published plan which seems almost exclusively economic in focus.

To look at the cassowary is to be overwhelmed by beauty. Its wondrous, vibrant colour palate of royal blues and deep crimsons; its stature and grace; its raw muscularity hidden in those legs and claws; and – especially important for a child – its fascinating profile, sporting a pointed casque at the crown of its head, suggesting it is the second cousin of a dinosaur. Or a unicorn.

Why should one solitary bird command such fascination? It is a difficult thing to explain. Perhaps it was when I discovered that it was the male cassowary who incubates and essentially raises the young; perhaps it was discovering that dagger claw, five inches long, was used only to make speedy progress in deep forest; perhaps it was knowing that its amazing casque acts as amplification for the cassowary’s call.

Or maybe its allure is more visceral and resides simply in its name, at once familiar and foreign. A name that draws you in and has you beg to know more.

But the beautiful cassowary is both shy and vulnerable. Experts have real concern that the iconic flightless bird of this amazing, belligerent, tough as nails continent may be overcome by competitive forces. Banal threats, such as wild pigs, and motor cars, and deforestation.

I sit with two cassowaries in their outdoor zoo enclosure, for twenty minutes. People come and go. Children stare and point, and get excited. And then they move on. And I wonder, do they realise that this amazing bird may soon take flight, for once? And forever?