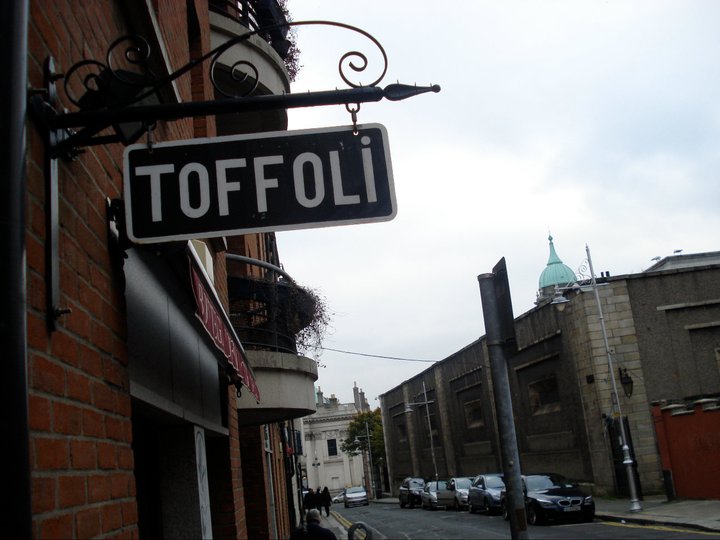 Toffoli, And The Meaning Of Local

Toffoli is a restaurant on my street. It is perhaps 15 metres from my door. When I stretch over my balcony, I can see Toffoli. It has been a constant presence since first I turned the key on my place.

But Toffoli operates like no other restaurant I know. For one thing, I never know if it will be open or closed. For a long time, I tried to figure out its rhythm. Perhaps the owners – an Irish woman and her Italian husband – worked a four day week? Perhaps they were open only on alternate days? Perhaps their opening was based on the turning of the moon?

I could not solve the riddle. Until I asked.

Carlo explained it simply. ‘I’ll cook for you if you ask me’.

So that’s it. Toffoli opens if it has an anchor tenant. Me. Or you. Anyone who is for sure. And then, as potential diners pass by this city side street, the little room fills up. Or not.

It is a curious, misbegotten, all-over-the-shop kind of place. Toffoli is full of odd chairs, cheap pine, wobbly tables, and a couple of random pews. I make it sound like there’s a lot of options. But there’s not. My local has six tables, two of which are for one person only. It is a small affair.

But I love it. I love that it’s been here for ages. I love that it is undependable. I love that I know the name of the owners’ only child. He’s Luca. (Sometimes the restaurant doesn’t open because of Luca’s football schedule). I love that the food is so simple, and quality-driven, and authentically deliciously Italian. I love that they talk to me like a person they know, not a customer who arrives and orders. I love that husband and wife argue as well as get on like a house of fire.

When I feel like a chuckle, I browse the reviews for Toffoli, online. Some people are outraged that Carlo can take more than an hour between taking your order and delivering a pizza to your table. In fairness, it’s not always the case. But it has never occurred to him that this might be an issue. When you’re here, you’re here for as long as it takes.

As I write, the man himself is talking about food to the gent at the table beside me.

‘Simple is more difficult than you think’, he says. ‘Curing meat is simple, but it takes 13 months to be ready. You have to wait’.

Finishing my tasty dessert of homemade ice-cream and strawberries, I decide upon this: there are things ordinary people know that most major brands never will. And because the marketing titans are unlikely to appreciate the randomness within ordinary, they won’t attempt to fake it.

And this is a good thing.