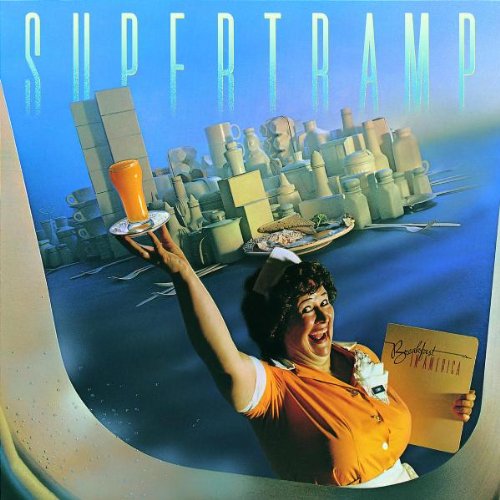 In her own way, she inhabited her morning diner like the waitress from the Breakfast In America album cover. In her own stooped way, she commanded the place and was the biggest contributor to its atmosphere. Calling orders to the chef. Suggesting to people where to sit. Coaxing an older, deaf gentleman to move to a more comfortable seat for himself.

We were about twenty in number, and she was the only woman in this emporium of men.

Do Japanese women eat breakfast at all, I wondered?

It was, I decided, a starting hypothesis. So little is for granted in this country which, to my absolute fascination, truly merits the description ‘foreign’.

The system in her eatery was refined and simple. One chooses and pays for food in advance, by using the machines at the door. Only then can one take a seat and present to her an ordering ticket. There is no requirement to talk.

Like many other things in Japan, one’s needs here are mediated by machine.

It had taken me some time pointing at other people’s food to realise this strategy wasn’t going to work. A youngish man saw my puzzlement and gestured his help. Our communication was by way of smartphone.

Anticipating a communication impasse, I had taken a photo outside of the eggs that I wanted. Many diners display their menu using simulated 3D models of what the food will look like, freshly served. The result is a sort of uncanny culinary taxidermy. Clarifying, though not quite enticing.

I pointed to the picture of eggs. My chosen dish cost ¥510, and he supplemented my ¥500 with his own coin. It is a bonding thing, to be bailed by a stranger to the tune of ¥10. Soon after, as he left, we nodded and smiled to each other. Without his help, after all, I might have followed the fate of Japanese women at breakfast.

The food that arrived bore no resemblance to the eggs in my picture. Rather, it was the dish to its right, the written description of which sat beside my eggs, which made a star turn. Eating succulent, battered shrimp, I surveyed the room.

The gentleman beside me slurped his noodles. And slurping is fully normal and practical. Two other men sat in low chairs – impossibly small – and ate. They were strangers to each other, and kept focused on their bowls.

Many things in her breakfast establishment felt different: the lack of caffeine; the preponderance of chopped leek which she prepared by way of a purpose-built leek-chopper; the complete absence of anything sweet on the menu.

But the most noticeable thing was the silence. This I have noticed on the street too. There is little chat. There is an absence of sudden movement. And here at breakfast time, every man gently arrives alone, and will gently leave without a single word spoken, save a hushed ‘thank you’.

I return to the token machine alone. Still hungry, I decide to play breakfast lottery, and randomly choose a dish for ¥490. There is an added frisson to life, when its most rudimentary decisions are made blindly. And so it was that, by happy accident, she brought me eggs for breakfast. 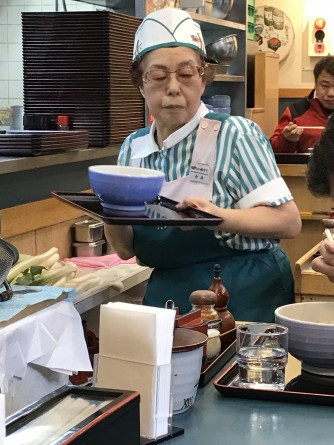