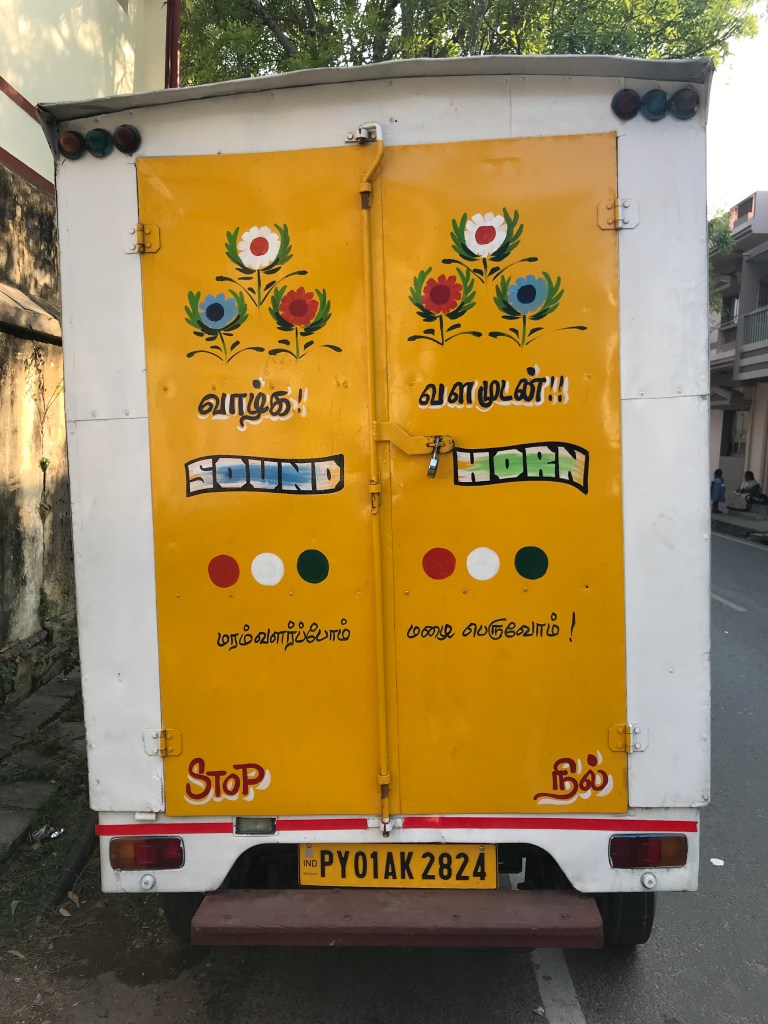 What It Means To Be Indian

I take it all back. Indians drive like maniacs. They overtake on a whim with zero view of oncoming traffic, and the margin of error as they skirt each other is ±0. Their keeping it road-safe efforts are compounded by wild dogs and wandering cows.

If the act of driving were dance, I reside in a militarised line dancing troop, while a billion Indians are busy doing the tango. Levity stalks the face of every driver. Not one person takes almost being run over seriously. All I can think of is imminent death.

My driver for the whole trip is Don Ford. I want to know how a 50 year old native of Chennai got such a name, but we don’t know each other well enough for such personal questions yet.

I have recently been promoted to the front seat, on his invitation. I prefer this to languishing in the back of the car. I rather know when that truck, laden with salt sacks, is about to hit us head on.

The hand-reaped salt of Odiyer Lake is locally very well respected. It would be a noble, preserving way to go.

‘They say we don’t value life’, Don says, referring to foreigners’ perception of Indian driving habits, ‘But, of course, we do.’

‘It’s just not practical to follow the rules all the time when so many people use the road. If we did that at rush hour, one half of the road would be clogged with traffic and the other half would be empty. That’s a bad use of the road.’

I observe the mayhem in front of me, replete with honking, light-flashing, weaving and wandering. I have to admit he makes a good point. This is the essential grammar of India’s traffic tango. It may be raucous, but it works for the most part. Because each driver needs to understand the other’s intent, the dance has been thus codified.

Indeed, 2014 global statistics seem to bear this out. India falls in the average zone with an annual toll of 18 road deaths per 100,000. Thailand is more than twice this figure, and India does significantly better than similarly developing and monstrous China.

Suddenly, Don cries out sharply. He’s seen something in the rear view mirror.

Lying flat out on the kerb is a limp, diminutive animal. The offending driver has pulled over and is exiting his vehicle.

As we continue, I ask Don what will happen next…

So, apparently, the owner of the calf will soon show up and demand compensation of the driver. If he refuses, the owner’s village will arrive and together they’ll harangue him for even more money. If he should try to flee the scene, they will make chase and there will be hell to pay.

Indian justice can be spontaneous, collective and, for issues such as these, delivered without recourse to the law.

As we weave our way to the gates of Pondicherry, the sparkling Bay of Bengal to our left, I get to the heart of the matter, asking Don the question at the centre of all my questions.

It takes me a while to articulate what I want to say.

‘So, what is the meaning of being Indian? What makes you Indian?

Time passes as he considers his answer.

I playfully use the information he has given me so far to discount the things it cannot be.

‘It’s not the language because they are many and varied’, I say. ‘It’s not the dress, because fashion traditions vary by region too; and it’s not the physical look, because people from the north are pale and high-cheeked while those here in the south are distinctively dark….’

He concludes his pause with an answer which takes on the tone of a speech.

‘What makes me Indian is that I am free’, Don Ford says. ‘I am not free to murder someone. But I can go about my own business. I can do whatever I want and I’m not bound by rules. I can use my initiative to get ahead. I am free to live my life. Free to drive as I choose’.