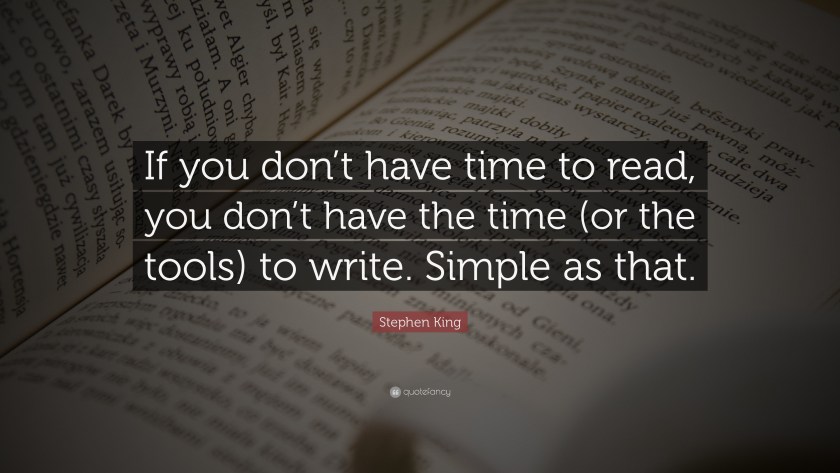 The established counsel for prospective authors, dispensed at the drop of a microphone, is twofold: Read. Write.

It is counsel which, in its own way, is as much censure as it is inspiration.

Read you lazy fuck. Then write. Don’t imagine you can string words together before you qualify to so do. Do your grunt work. Learn from your elders. Find their shoulders.

The thing about wise maxims is that they pack some lies among their truths.

They are not wrong, or disingenuous, or corrupting. Rather, they simply deal in universal assumptions that pertain for most, and are mostly correct. Maxims are stabilisers for our mental and artistic reckoning – when we have fledgling skills in art, or minimal time to think, it is folk wisdom that carries the load.

I remember the time I first encountered a label with the words ‘One Size Fits All’. My immediate response was delight. There was no need to choose between hats, nor to know the circumference of my head. Here was a magic accessory which would magically expand to fill any skull provided. Indeed, it took my teenage self some time to accommodate to choosing socks from the array before me, protruding from steel shop pegs.

It was hardly an overwhelming challenge: there were 9”-11” socks, or 12”-14” socks. I feel there were three or more lanes of socks in the 1980s, but can no longer recall the exact road markings.

The great liberation of my adult life came in a simple recognition. It was, that the act of maturing is the act of mining maxims for their worth, discarding those things that do not serve, and inventing one’s own wisdom when so needed.

To be adult is to curate and invent, and to own those choices in front of others. It is a long journey, I am glad to say, which ends at the end of things.

Perhaps my real criticism of the maxims that can rule our thinking is not that they are faulty, but rather that they are incomplete. Seeing them as cut-out representations is perhaps the better starting point. It is for us to dress them, and to make them our own.

I am feeling combative with regard to that particular maxim as it has the incongruous effect of clipping my authorial wings.

Everyone knows that there is such a thing as craft and voice in the tool box of the author. The world is aware that writing is not some impulsive, silly, dreamt-up thing that anyone can do. To write serioulsy, one should have a sense of history, of respect, of apprenticeship. The world is in agreement. There is a formula to becoming an artist of merit.

Although this may be a ‘somewhat truth’, it is not the maxim of my choosing.

When I write, I do not channel the wit of Austen, the suspense of King nor the beauty of Shakespeare. Rather, my reference points are my own thoughts (which lie in my own body) and the spoken words of my shared conversations.

My act of writing is not a foray into literature, but an expression of my desire to play. I write to share what I am thinking as a way of connecting, and more deeply living.

And so, my counsel to writers comes in the form of a maxim chiseled from my own experience. It is a maxim that offers 50% extra free as it consists of three words, and not two.

Now, dress that up as you will.